In this thesis, we study the contribution of micro-gravity and magnetotelluric methods to the monitoring of the geothermal reservoirs. The micro-gravity monitoring was applied to the enhanced geothermal systems of Soultz-sous-Forêts and Rittershoffen (France) as well as to the volcanic geothermal systems of Krafla and Theistareykir (Iceland). In addition, magnetotelluric measurements were performed on the Theistareykir geothermal field. Indeed, time-lapse and/or continuous gravity measurements highlight the subsurface mass redistribution and hence, help to quantify the recharge of the reservoir. Time-lapse and/or continuous magnetotelluric data are sensitive to the electrical resistivity variations: they help to determine the preferential pathway for the geothermal fluid.

The Soultz-sous-Forêts and Rittershoffen geothermal networks count 13 gravity stations each. Three of them are common to the two networks. Gravity surveys are carried out each summer from 2014 to 2019 for Soultz-sous-Forêts and from 2015 to 2019 for Rittershoffen. No significant gravity variations are observed on the Rittershoffen network. A differential gravity signal appears on the Soultz-sous-Forêts network in 2016 with respect to 2014 i.e. following shortly the beginning of the 1,7 MWe production after 3 years maintenance and upgrade. It is consistent with the position of the injection and production wells. The maximum change is 31 ± 6 μGal observed in 2016 with respect to 2014. However, some simplistic models (spheres and cylinder) show that the gravity changes induced by the geothermal production at 5 km depth would be too small and hence not measurable with a Scintrex CG5 gravimeter. It results that the gravity results acquired on the Soultz-sous-Forêts geothermal field are not explained.

The gravity network of the Krafla geothermal field counts 24 stations measured in 2017 and 2018. Part of them were already measured in the past. The geothermal production started in 1978 to reach a 60 MWe production in 1999. As a consequence, we study the long-term evolution of the reservoir (40 years). We notice a general gravity increase in 2018 with respect to 2017. A model of the mass variation using a cylinder demonstrates that the injected and produced masses at the Krafla geothermal site do not explain the measured gravity changes. These variations could be better explained by a magmatic intrusion. The magma arrival into the magmatic chamber compresses both the primary magma and the surrounding rock, which induces a gravity increase in 2018 with respect to 2017. Assuming a visco-elastic medium, this intrusion would also create a delayed inflation. Actually, the vertical displacements, deduced from the InSAR analysis, show a 10-14 mm.yr-1 inflation between 2018 and 2019 following 40 years of subsidence. This maximum rate occurs right above the magmatic chamber, which caused the Krafla fires from 1975 to 1984. New gravity surveys combined with the study of the vertical displacements in the near future would help to refine this interpretation.

27 gravity stations were measured in 2017, 2018 and 2019 at the Theistareykir geothermal field i.e. before and after the beginning of the 90MWe production. We study consequently the short-term evolution of this geothermal reservoir. A gravity decrease is observed in the production area. The minimum variation is -38 ± 11 μGal in 2019 with respect to 2017. It is around twice the measured value in 2018 with respect to 2017 at the same station. A multiple Mogi model was used to explain most of the gravity changes acquired in the production area: the spheres are located at the bottom of the production wells. It would mean that we do not observe any recharge, which would affect the sustainability of the power plant. We recommend performing new gravity surveys in the near future to refine this interpretation. Moreover, the gravity data would be useful to calibrate the TOUGH2 (Transport Of Unsaturated Groundwater and Heat) model that has been developed for the Theistareykir geothermal reservoir.

In addition, 9 magnetotelluric stations were measured in 2017, 2018 and 2019 at the Theistareykir geothermal field. The magnetic coils and the electric dipoles were not perfectly orientated towards the magnetic north because of the high latitude of the studied site. We propose a methodology to correct these uncertainties: it consists to maximize the spectral coherency between the horizontal magnetic fields acquired at the studied station and the one measured at the remote station. Regarding 7 comparable measurements, the measured angles are similar to the calculated angles with a maximum difference of 3°. A confidence interval can be defined using the results of a sensitivity study of the apparent resistivity and phase to this maximal uncertainty on the coils orientation.

A large resistivity increase would be observed on the YX component of the station TH012b at all the studied periods. For instance, the electrical resistivity would be multiplied by 5 at 0,4 s; this period fits with a 2 km skin depth, which is indeed the mean depth of the production wells. The electrical resistivity curves are then similar in 2017 and 2019. This punctual increase would be explained by the increase of the vapour phase in an EW fault following the beginning of the production. Actually, such a fault is observed on the field.

Unfortunately, the continuous magnetotelluric measurements do not help to refine this interpretation. The electrical data are really noisy preventing the apparent electrical resistivity and phase to be estimated. Further work on the data filtering would be required.

Finally, only one gravity station (120) is located on the top of the Baerjarfjall volcano at the Theistareykir geothermal field, close to the magnetotelluric station TH014b. Hence, we cannot compare the result observed at the station TH012b between 2017 and 2018 with the measured gravity variations. 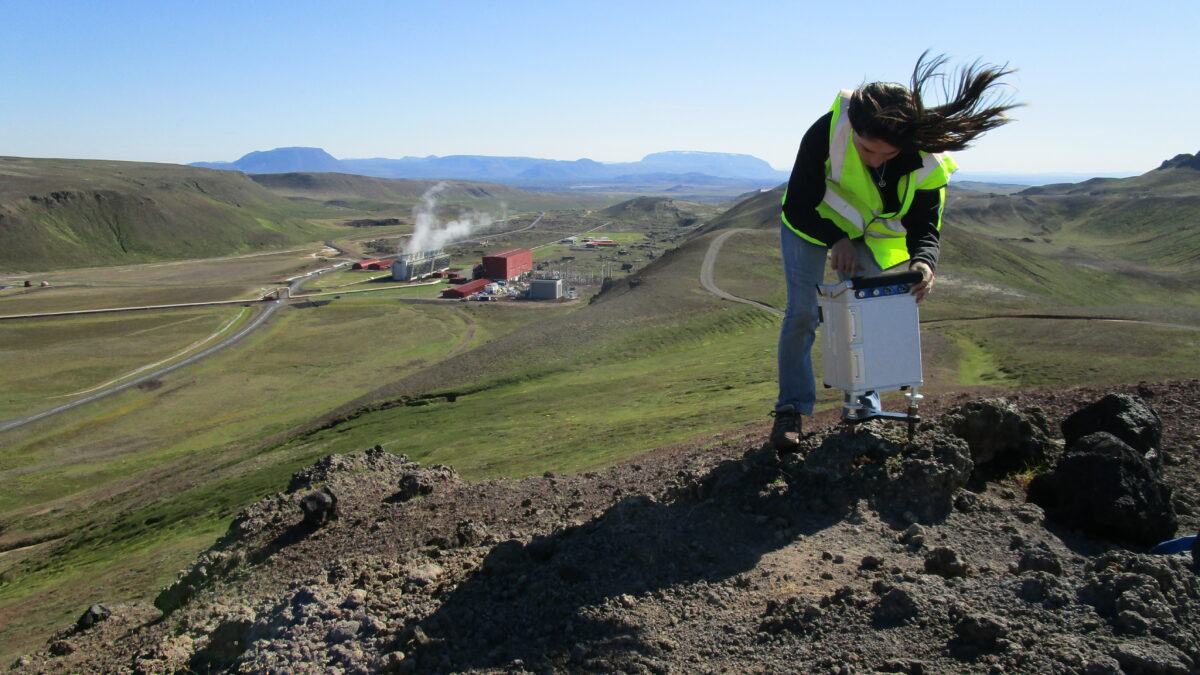