Skip to content
The next Café LabEx will be presented by Ioannis Stefanou (EC Nantes) at EOST (5 rue René Descartes, Strasbourg) Thursday, January 16 at 3 pm. The title of his presentation is: Controlling Anthropogenic and Natural Seismicity
Abstract:

We present a theoretical study focusing on exploring the possibility of controlling anthropogenic and natural seismicity. More specifically, we address the general question of earthquake control: Is it possible to control and avoid anthropogenic and natural earthquakes and how?
We address this question using the spring-slider model in a mathematically rigorous framework and we investigate the conditions under which a seismogenic fault system can be stabilized by fluid injection (Stefanou, 2019). The concept that pore pressure increase due to fluid injection can stimulate fault slip is well established nowadays. Recent works also show the potential of generating aseismic slip in some cases (Cornet, 2016). However, the question of earthquake control is still open and challenging.
We use a general Coulomb-type rheology that depends both on slip and slip-rate for describing the frictional behavior of a fault system. Our analysis leads to a non-autonomous system, whose steady-state and stability are retrieved using a double-scale asymptotic analysis in time. Additionally to rock elasticity, which is responsible for the progressive elastic energy build-up that is released abruptly during earthquake events, we consider also radiational damping. This is performed by accounting for the rock viscosity through a damper in Kelvin-Voigt configuration.
We show mathematically that the system is stabilizable by controlling fluid pressure and we present scenarios of earthquake control. 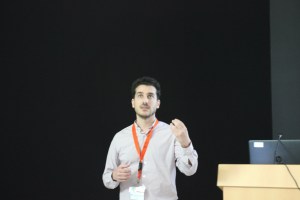